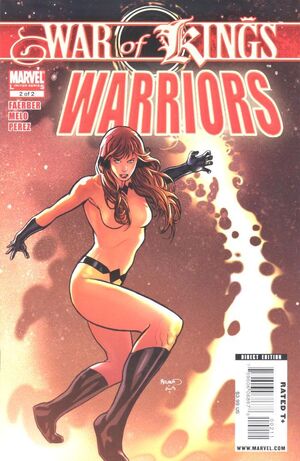 The royal women take center stage as we spotlight Crystal and Lilandra! When a group of disgruntled Kree launch a series of bombings aimed at the Inhumans Royal Family, Crystal is charged with quelling the violence—but can she bring the guilty to justice without causing civil war? Plus: a flashback story to one of Lilandra's earliest adventures, as the future Empress of the Shi'Ar must face a trial by fire ignited by the Brood! It’s two brand new stories that spotlight key players in the War of Kings!

Appearing in "Rite of Passage"Edit

Synopsis for "Rite of Passage"Edit

Retrieved from "https://heykidscomics.fandom.com/wiki/War_of_Kings:_Warriors_Vol_1_2?oldid=1759178"
Community content is available under CC-BY-SA unless otherwise noted.