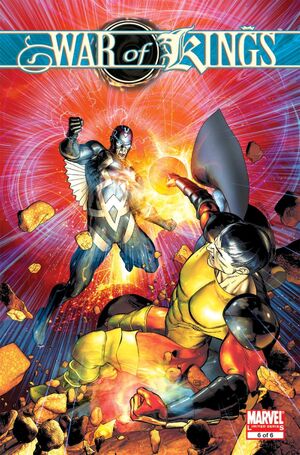 This is it – the big fight for all the cosmic marbles! Shi'Ar vs. Inhuman! Black Bolt vs. Vulcan! Who will rule? The fate of two intergalactic civilizations teeters on the brink, and the outcome of this conflict will send shockwaves throughout the Marvel Universe! Don’t miss the climactic chapter in what IGN.com calls: "Action-packed but intimate and character driven…this could very well be the textbook definition of how to execute major superhero storylines."

Retrieved from "https://heykidscomics.fandom.com/wiki/War_of_Kings_Vol_1_6?oldid=1756229"
Community content is available under CC-BY-SA unless otherwise noted.