Start a Wiki
Part of the 'Blood and Thunder' event 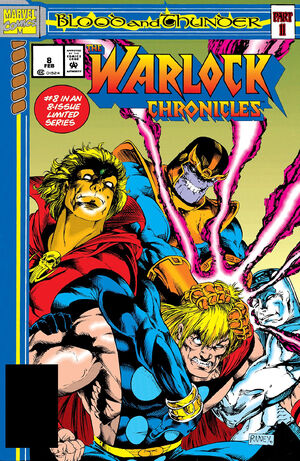 If we cure Thor, both he and Asgard will be eternally grateful.

Thanos and the heroes attempt to merge the Mind Valkyrie back into Thor's psyche. In Asgard, Sif and Bill arrive at Volstagg's home and ask him if anyone has seen Thor, and he states that no one has seen him since he left Asgard. Sif and Bill still want to try to cure Thor without Odin knowing about his condition. During the procedure to merge Thor and the Mind Valkyrie back together, the heroes are swept into a psychic plane of existence, only to have the tables turned on them and they are swept into Thor's madness. They use force of will and manage to escape. The Mind Valkyrie disappears, apparently dissipated, and Thanos' machinery explodes. They have about 2 hours before Thor escapes. So they decide that no matter the consequences, they must take Thor to Odin.

Retrieved from "https://heykidscomics.fandom.com/wiki/Warlock_Chronicles_Vol_1_8?oldid=1513270"
Community content is available under CC-BY-SA unless otherwise noted.