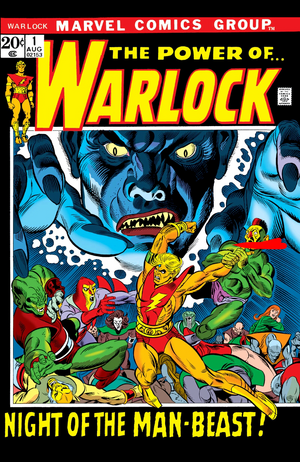 How tempting to push the second - and bring sweet Oblivion to... But, no! I, the High Evolutionary, have given my Word - AND MY WORD IS MY BOND!

Appearing in "The Day of the Prophet!"Edit

Synopsis for "The Day of the Prophet!"Edit

High Evolutionary lets Counter-Earth vibrate on a different plane, a microsecond out of sync with the original Earth to avoid Detection by an unmanned rocket. He contemplates whether to destroy Counter-Earth or not.

Warlock is returned to the surface, where the teenagers ask him what happened. He ignores the questions, and asks if any of them would like to abandon him at this point in the journey. Everyone replies that they will not abandon, except Jason. Jason says he wants to go back, but the rest of the group tries to convince him to stay. Warlock tells them to respect Jason decision, but Jason ultimately ends up not abandoning them, due to the persuasion of his friends.

Sometime later, the group wanders through the city, and they stumble upon a gathering where a Prophet is giving speeches about how a savior of Counter-Earth is coming. The gathering is assaulted by two evil New Men, Haukk and Pih-Junn. They attack Warlock and the Prophet, but after a brief fight, Warlock defeats both of them. The Prophet tells Warlock that he is the savior that has come to Counter-Earth, and the Prophet offers to take Warlock to wear he senses the Man-Beast is. However, Warlock decides not to take the four teenagers, and he sends them to the Prophet's sister's house for their own safety.

Warlock and the Prophet enter the sewers, and after brief exploration and a trap door, they arrive at the Man-Beast's lair, where a room full of evil New Men are waiting for them. Warlock spots Man-Beast sitting on his throne, and attacks him. However, it turns out it is just a mannequin. The Prophet then removes his mask to reveal himself to be Man-Beast the entire time. He then threatens to kill Warlock if he doesn't ally with him.

Retrieved from "https://heykidscomics.fandom.com/wiki/Warlock_Vol_1_1?oldid=1466494"
Community content is available under CC-BY-SA unless otherwise noted.