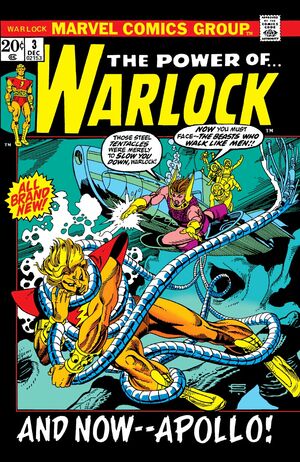 For the House of Worship is built on bricks of fearful Power, and MINE is the STRENGTH ETERNAL and the GLORY EVERLASTING!

Appearing in "The Apollo Eclipse!"Edit

Synopsis for "The Apollo Eclipse!"Edit

Apollo is revealed to be a New Man in the form of a Warthog, his real name is revealed next issue. Apollo takes Eddie and Ellie Roberts hostage and offers Warlock to trade himself for the twins.

Retrieved from "https://heykidscomics.fandom.com/wiki/Warlock_Vol_1_3?oldid=1466498"
Community content is available under CC-BY-SA unless otherwise noted.