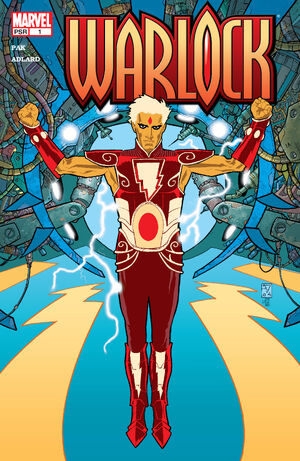 None of that Bitten-by-a-Radioactive-Spider Claptrap here.

The Enclave use artist Janie Chin to create a new version of Warlock using a movie company called Beehive Productions as a cover. The new Warlock is created in an artificial reality in which he is to save humanity from self-destruction and establish a Utopian dictatorship. The Enclave is watched by their new member, the mysterious Mr. Smith. In a dream Janie sees a female version of the new Warlock.

Retrieved from "https://heykidscomics.fandom.com/wiki/Warlock_Vol_6_1?oldid=1504095"
Community content is available under CC-BY-SA unless otherwise noted.