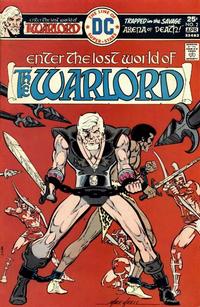 We will grow in number. Wherever there are men willing to fight for liberty, they will rally to our banner! Farmers and slaves... yes! For who better knows the bitterness of oppression? As for weapons, I will build you weapons such as you have never dreamed of! Siege towers to breach city walls... catapults and ballistae to hurl fire and death among the enemy... crossbows to penetrate the finest armor! All these and more if you will follow me. There is a rich city. There will be gold and plunder for all. But I offer something far greater... I offer you the chance to die free men!

Appearing in "Arena of Death"Edit

Synopsis for "Arena of Death"Edit

Travis Morgan is recaptured by another slave raider and trained as a gladiator in the arena, where he meets a fellow captive, Machiste, and battles for their freedom.

Retrieved from "https://heykidscomics.fandom.com/wiki/Warlord_Vol_1_2?oldid=1466243"
Community content is available under CC-BY-SA unless otherwise noted.