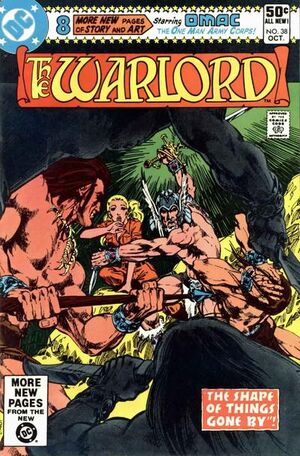 Magic swords are harder to come by than honest politicians.

Appearing in "The Shape of Things Gone By"Edit

Synopsis for "The Shape of Things Gone By"Edit

Travis Morgan meets with his grown daughter and several men from the outside world, one of whom has come to kill him.

Soldiers storm the computer control room and attack OMAC. OMAC defends himself, but insists that he is trying to surrender. The soldiers suddenly stop attacking and OMAC allows them to take him into custody. They bring him to their leader, Wiley Quixoite. Quixote is the president of International Communications and Commerce, one of seven corporate empires vying for control of the world. OMAC tells Wiley that he wants to become a member of his strike team. Quixote is incredulous, but OMAC explains that if he fights in the civil war on IC&C's behalf, then perhaps he can help end the war quickly thus minimizing the loss of life. Quixote knows better than to trust OMAC to remain loyal, but he would be foolish to turn down the offer. Wiley welcomes him to the team and has him ushered to his new quarters. When OMAC is gone, Wiley meets with a Visionary named Mextaxa. The plan to eliminate OMAC once he ceases to be useful to them.

Retrieved from "https://heykidscomics.fandom.com/wiki/Warlord_Vol_1_38?oldid=1466315"
Community content is available under CC-BY-SA unless otherwise noted.