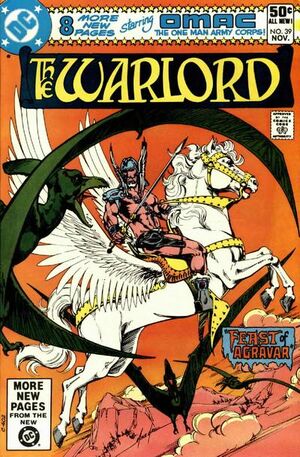 I care little for the affairs of dead men.

Appearing in "Feast of Agravar"Edit

Synopsis for "Feast of Agravar"Edit

The Warlord and Shakira find their way into a high-tech abandoned outpost of old Atlantis, where they encounter a robot who is programmed to serve...and who intends to serve them to a snake-god.

In St. Louis, Missouri, OMAC leads IC&C's air raiders against the opposing mercenary forces of Verner Bros. Inc. The battle begins at sunrise and by midday, the fierce fighting has already claimed the lives of 563 IC&C soldiers and 973 Verner mercs. OMAC presses the advance and his squads forge deeper into the city. By sunrise the following day, Verner Bros. Inc. launches its counterattack. The battle continues all throughout the morning and afternoon. By the time it concludes, IC&C emerges victorious. OMAC is horrified by the mounting casualties and wonders if his decision to lead IC&C's forces was the correct one.

Retrieved from "https://heykidscomics.fandom.com/wiki/Warlord_Vol_1_39?oldid=1466317"
Community content is available under CC-BY-SA unless otherwise noted.