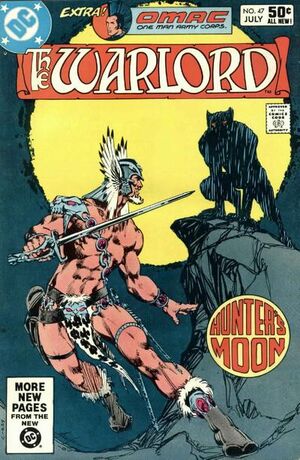 I used to scoff at magic, too. But I'll tell you something, I've seen it and it works. Whatever it is, it works.

After glimpsing Skartaris's little-seen moon, Travis Morgan encounters another emigrant from the outer world: Mikola Rostov, who demands to know what has become of Mariah Romanova, and who is also a werewolf.

Appearing in "The Marseilles Connection"Edit

Synopsis for "The Marseilles Connection"Edit

Omac helps Mariela and her Black Marketeers fight Dr. Lazarre and his monstrous one-celled organism, and, after a falling-out, Metaxa kills Wiley Quixote.

Retrieved from "https://heykidscomics.fandom.com/wiki/Warlord_Vol_1_47?oldid=1466333"
Community content is available under CC-BY-SA unless otherwise noted.