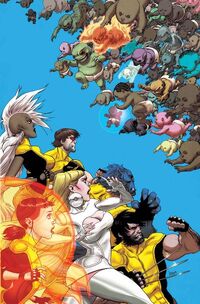 Origin
Formed during Mad-Jim Jaspers' reality-warping of London, later by Jim Jaspers in Mbangawi. Mutated by those warps.

The Warpies are children mutated by unstable dimensional energies released after the reality manipulations of different versions of a Mutant called James Jaspers. These phenomena are known as "Jaspers Warps". Their name was derived from these warps and was given to them by an R.C.X. agent. Their exogenetic mutations granted super-human abilities often with unusual morphologies while also causing them to suffer and die young, sometimes during spectacular explosions.[1]

The first Warpies were discovered in London, after Earth-616's Mad Jim Jaspers Warp, and were one by one take from their families to a vast prison where some of them where turned into government agents.

Concerned that R.C.X. commander Peter (Nigel Orpington-Smythe) planned to turn the children into a parahuman army, some R.C.X. agents, including Michael, Raphael and Gabriel, tried to hide the Warpies and forced Brian Braddock (alias Captain Britain) to take the Warpies into his home (Braddock Manor)[2]. The Cherubim attacked the Manor, before Cherub Whirlwind's deaths. The Warpies were then placed under the care of the Braddock Manor robot Mastermind. However, the agents' decision to not fully inform the hero of their situation meant he was reluctant to help.

Joshua N'Dingi, the heir of Mbangawi's kingdom, was sent to England where he became a member of R.C.X. He was hideously scarred when a Warpie baby exploded in his face. The British government spent millions outfitting him with cybernetic parts.[3][4] This experience engendered a hatred for the Warpies.

Other Warpies were found by the criminal James Lexington Christian alias Uncle Lex, who taught them to steal for him as his "Parasites".

End to the Warpies' births

It was stated by Roma and Braddock's computer Mastermind that Linda McQuillan, as an anomaly from the now erased Earth-238, was preventing Earth-616 from healing the wounds caused by James Jaspers's reality-manipulations: The continuous birth of Warpies and the existence of the Crazy Gang. When McQuillan left Earth-616 for Otherworld, the Warp-children ceased to appear, until the appearance of a new one, several years after.[5]

Under Roma's direction, Mastermind decided to take care of Braddock Manor's Warpies, stating that the R.C.X. were welcome to assist him, but he was the only in command.

Through an association with W.H.O., some of the R.C.X. Warpies were relocated to Muir Island, under Moira MacTaggert's care.[6] The Island was soon attacked but the Warpies were unharmed. Their fate is unknown.

Eventually Peter recaptured the Warpies and his errant agents. Peter used the powers of the Warpies to make the underground complex Cloud Nine. He then formed different Warpie teams for various purposes, including the Advocates and the Seraphim, as well as the already existing Cherubim.

When many Warpies started to lose their super powers as a result of the change in Merlyn's Cosmic Convergence, Peter captured the British super team Excalibur and told them they were suffering from the same genetic defects as the Warpies did, presenting them as mutants, in the hope that they would cure the Warpies as well as join his organization.

However Excalibur learned of his true plans and engaged the Warpies in battle. As the heroes were about to lose, many weaker warpies joined the fight on their side, and a massive melee started in Cloud Nine, stopped by the defeat of Peter. The freed R.C.X. agents and Excalibur ally Alistaire Stuart took command of R.C.X. and took care of the Warpies.[7]

The Warpies were later abducted and mutated by Black Air and then used as weapons by the robot Mastermind under the guise of Roma, who tried to take control of Otherworld, destroying a lot of the Captain Britain Corps members. The Cherubim were used as Mastermind's elite corps.[8]

After a team of mutated and armored warpies led by Widget on Captain UK, Excalibur rebanded and came to Otherworld.

The robot was eventually defeated by the newly formed Excalibur, and Captain Britain was appointed Otherworld's new leader and he used his powers and Excalibur's sword to cure all Warpies present. The Warpies were now ordinary human children again. The only known Warpies confirmed to be depowered were the Cherubim, whether others were depowered as well is unclear.[9]

The fate of the newly human Warpies is unknown.

It was revealed that all those events were been planed by Widget and Kang the Conqueror, for an unknown purpose.[9]

Leader of X-Force, Peter Wisdom bombed a Secret Service laboratory who dessicated Warpies, and blaming Alistaire Stuart to haven't closed down this lab when he became the leader of the Office of Paranormal Activies. He then warmed him about secrets services, such as Black Air,'s violations of the human right, especially about those to mutants, promising to look close of them.[10]

It is unknown if there was still Warpies examined there after the events in Otherworld and at the time of the bombing.

After a new Jim Jaspers warp in the village of Karere, Mbangawi, several warpies were born, some of them exploding in the hospital. Mutantes Sans Frontières came to took care of them, as well as Joshua N'Dingi, former R.C.X.'s agent, who intended to destroy them and forbid to anyone to come across the village for years.[11]

Since Jim Jaspers was terminated by N'Dingi from prevent from another desastrous warp, no more Warpies will ever come from this village, but the ones who were born were seemingly not killed, after the X-Men promise to assure Mutantes Sans Frontières' help to Karere.[12]

The Warpies spawn most of time from young humans, from unborn babies to children. A few adult or young adults warpies have been shown, as Uncle Lex. It was stated that no warpies in the Cloud 9 was adult, and it was only made mention of babies in Karere.

As for the mutants or the inhumans, the warpies are based on an human body, and most of them develop at least an obvious sign of mutation, as an usual skin colour, an aura or a physical mutation.

During his time in the Cloud 9 complex, Nightcrawler was studied by the R.C.X. scientist who were confusing mutants and warpies.

The scientist stated that as his teleportation powers weren't related to his physical features and to his ability to adhere to walls, he was a "second generation mutant" (what he was indeed). His hypothesis was he was combining his own "warped gene" with his parents'. All those statements haven't seemingly a real value however.[13]

For now, no evidence of second generations warpies have ever been recorded.

The Warpies possess various powers, much like Mutants or the Inhumans. The most known and feared power is spontaneous and uncontrollable explosions, causing the death of the individual and all beings in proximity to him, but many other powers are known.

The Warpies often have no control of their powers, as many of them are newborn babies. Also, their powers are very strong, and eventually kill them before they reach maturity.

Habitat: Earth
Gravity: Earth
Atmosphere: Earth
Population: According to Nigel Orpington-Smythe, there was about 400 warpies, called by him mutants. However it strongly possible that there was hundred others across England.

Following their depoweration by Captain Britain, the most or totality of the Warpies, the only one confirmed and recorded, at least a few dozens of them, are located in the village of Karere, in Mbangawi.

Type of Government: The Warpies do not have a government of their own but are usually tracked for interest or fear by the government of their home country (United Kingdom, Mbangawi), or by individual (Mastermind, Shoulders McGill, Uncle Lex)
Level of Technology: Technology level unknown.
Cultural Traits: Cultural traits unknown.
Representatives: List of the all recorded Warpies.

Also, a few individuals can be observed in the village of Karere, in Mbangawi.

Retrieved from "https://heykidscomics.fandom.com/wiki/Warpies_(Race)?oldid=577514"
Community content is available under CC-BY-SA unless otherwise noted.