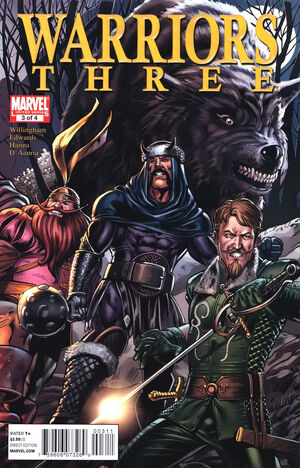 What dolt would waste a good water skin by filling it with water? This is mead, girl! Good Vanaheim mead! Go on! Drink it! It'll put hair on your che-- uh-- That is to say --

Appearing in "Jubilation of the Wolf"Edit

Cover by AMANDA CONNER with LAURA MARTIN with Fenris, God of the Wolves, loosed from his imprisonment in Hel, the Warriors Three have their work cut out for them... and even with all of Asgard hoping to tame the monster, Volstagg, Fandral and Hogun have a particularly personal score to settle with him. Unfortunately, there’s this lovely A.I.M. agent who seems to be distracting Fandral. But he’s a professional, he’ll keep his head in the game... right? From the writer of the bestselling Fables Bill Willingham and the Fantastic Four’s fantastic Neil Edwards, this is one series that you can’t afford to miss! With covers by Amanda Conner (The Pro)!

Retrieved from "https://heykidscomics.fandom.com/wiki/Warriors_Three_Vol_1_3?oldid=1466570"
Community content is available under CC-BY-SA unless otherwise noted.