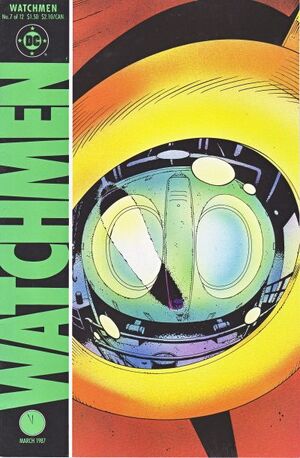 I mean...there I was, hanging out with a real hero, being his friend and everything. Being a crime-fighter, y'know? Like part of a brotherhood or something...That's why I sort of regretted the Crimebusters falling through back in sixty-whenever-it-war. It would have been like joining the Knights of the Round Table.; being part of a fellowship of legendary beings...but eventually I realized the Comedian was right: it's all crap dressed up with a lot of flash and thunder. I mean, who needs all the hardware to catch hookers and purse-snatchers? I mean really.

Appearing in "A Brother to Dragons"Edit

Synopsis for "A Brother to Dragons"Edit

Laurie explores Dan's basement and looking at the Nite Owl equipment. When entering the Owlship, Laurie accidentally turns on the vessel's flamethrower as she mistaken a button for a cigarette lighter. Dan quickly comes down and puts out the fire. After Laurie apologizes for the incident, Dan gives her a proper tour, showing her collection of crime fighting gadgets and mementos. Laurie is impressed but Dan often downplays his belongings.

Laurie and Dan then goes back up and watches the television. As they are watching, a passion sparks between them in which Laurie initiates making love. They fall asleep until Dan later wakes up from a nightmare.

Retrieved from "https://heykidscomics.fandom.com/wiki/Watchmen_Vol_1_7?oldid=1474408"
Community content is available under CC-BY-SA unless otherwise noted.