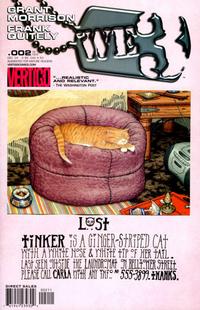 Publisher
DC Comics
Previous Issue
Next Issue
We3 #1
We3 #3

Appearing in "1st Story (No Title)"Edit

Synopsis for "1st Story (No Title)"Edit

After escaping, the WE3 are pursued by the military and ultimately defeat the soliders sent to recapture them. They are then attacked by biorg rats whom they defeat. Eventually the WE3 encounter a family out hunting who end up shooting 3 (rabbit) leading to 2 (cat) killing the family's dog and 1 (dog) killing the father. The son is later found alive. The military then plots their next move with "Animal Weapon 4"

Retrieved from "https://heykidscomics.fandom.com/wiki/We3_Vol_1_2?oldid=1474793"
Community content is available under CC-BY-SA unless otherwise noted.