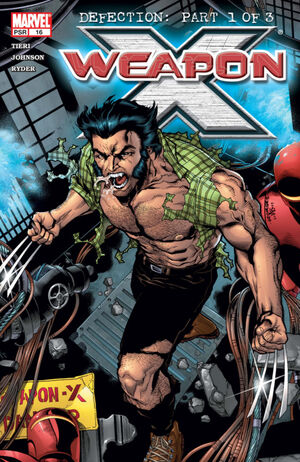 And here I've been saying all this time you're a bright kid. Come on, you know where this is headed... We want you to kill him.

Appearing in "Defection Part 1: Welcome to Weapon X, Chamber...Hope You Survive the Experience!"Edit

Synopsis for "Defection Part 1: Welcome to Weapon X, Chamber...Hope You Survive the Experience!"Edit

Jono still had nightmares of his power manifesting, but when he awakes, he sees his face fixed by Weapon X, and is scared no longer. He is happy to do normal things like brushing his teeth and eating while shown around the place by The Director. The Director starts questioning him about The X-Men, mainly Wolverine. Soon Chamber gets a little angry when he mentions Husk. The Director then gets mad too, and says he has to prove himself. He gives him a mission of killing John Sublime, and Chamber is unsure. But he doesn't know Wolverine was listening outside the whole time.

Retrieved from "https://heykidscomics.fandom.com/wiki/Weapon_X_Vol_2_16?oldid=1517173"
Community content is available under CC-BY-SA unless otherwise noted.