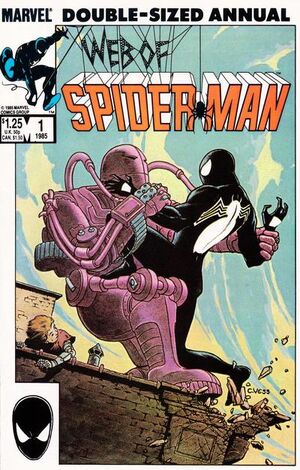 Appearing in "Give Me a Hand, Future Max"Edit

Spidey has kayoed kingpins of crime, mopped up mobsters and gotten J. Jonah Jameson's goat countless times. But now he faces his greatest challenge of all when he must stop a young, crippled, science whiz-kid from becoming the next mastermind of crime!

Retrieved from "https://heykidscomics.fandom.com/wiki/Web_of_Spider-Man_Annual_Vol_1_1?oldid=1471980"
Community content is available under CC-BY-SA unless otherwise noted.