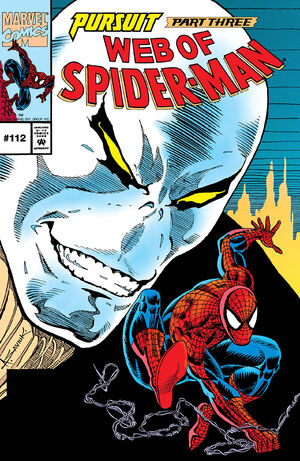 The Chameleon (disguised as a cop), distracts the wall-crawler by freeing some prisoners out of jail. After doing this, the villain goes to Kraven´s old house (where he burried Spider-Man alive in Kraven´s Last Hunt) Doctor Kafka wants to remodel the Ravencroft Instute to house all types of psychotic killers, and she asks John Jameson to be its head of security. Spider-Man, following the Chameleon, reaches his base.

Retrieved from "https://heykidscomics.fandom.com/wiki/Web_of_Spider-Man_Vol_1_112?oldid=1472430"
Community content is available under CC-BY-SA unless otherwise noted.