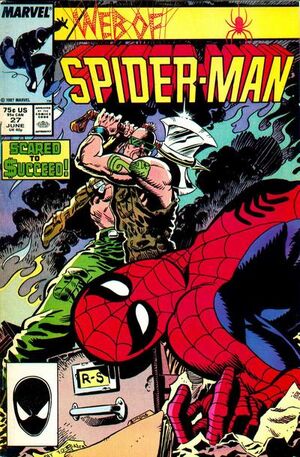 Appearing in "Scared to Succeed!"Edit

The bizarre contract enforcer is called Headhunter and he's got a trophy-slicing axe to grind against beleaguered automaker Lee Camino. When Spider-Man becomes involved in a desperate attempt to save Camino's son, he discovers why the hard-charging businessman was "Scared to Succeed"

Retrieved from "https://heykidscomics.fandom.com/wiki/Web_of_Spider-Man_Vol_1_27?oldid=1472024"
Community content is available under CC-BY-SA unless otherwise noted.