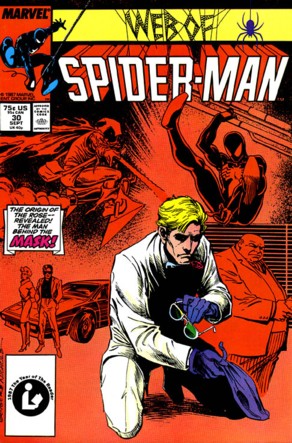 Appearing in "The Wages of Sin"Edit

Synopsis for "The Wages of Sin"Edit

The origin of the Rose, as [Ned Leeds] visited Richard Fisk to ask him for collecting compromising information about his fathers' criminal activities. At first Richard refused, but after his mother Vanessa was put in peril due to Kingpin's fight against Daredevil, Richard decided to disguise as the Rose to try to defeat this father. Also, the episode concludes with Richard Fisk visiting his father at Fisk Towers and offering him his services in the Kingpin's criminal organization.

Retrieved from "https://heykidscomics.fandom.com/wiki/Web_of_Spider-Man_Vol_1_30?oldid=1472030"
Community content is available under CC-BY-SA unless otherwise noted.