Start a Wiki
Part of the 'Kraven's Last Hunt' event 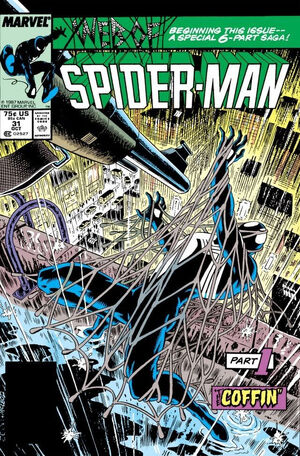 Kraven battles a beast and beheads it with his bare hands. He digs a grave and goes to a coffin, realizing that he "must die soon," and picks up a replica of Spider-Man's costume. Meanwhile, Spider-Man visits the funeral of the two-bit gangster, Joe Face at the Jimmy's Corner bar, even though he is not exactly sure why he should care. The funeral goers try to scatter when Spider-Man arrives, but the masked hero stops them, saying he has only come to say goodbye. Spider-Man leaves a donation before going back to his apartment. He realizes that, like many of his loved ones, he too is going to die. But not yet.

That night, Peter Parker has a nightmare that he is turning into Kraven. Unable to rest, Peter changes into Spider-Man to websling around the city. Kraven drops onto a nearby building from a helicopter and fires two darts at the "Spider," the second one hitting its target. Spider-Man starts hallucinating that Kraven is the ghost of Joe Face. Kraven knocks Spider-Man down with a pole and captures him in a net. Kraven shoots Spider-Man with a rifle and triumphantly buries him in a mock funeral.

Retrieved from "https://heykidscomics.fandom.com/wiki/Web_of_Spider-Man_Vol_1_31?oldid=1472032"
Community content is available under CC-BY-SA unless otherwise noted.