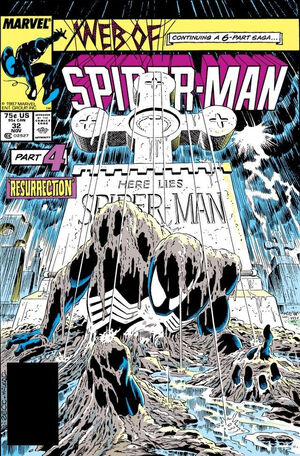 Peter Parker imagines himself curled up in fetal position. He sees Ned Leeds, but the figure disappears once Peter reminds him that he is dead. Peter transforms into a blue spider, but shadowy figures attack it. Peter crawls out of the spider's body and claws at the ceiling.

Spider-Man emerges from his grave and stumbles into Kraven's mansion. From the newspapers scattered on the ground, Spider-Man learns that one of his impersonators has been attacking the town for two weeks. Spider-Man visits Mary Jane at their apartment for a while before going after Kraven and finding him wearing a Spider-Man costume.

Retrieved from "https://heykidscomics.fandom.com/wiki/Web_of_Spider-Man_Vol_1_32?oldid=1472034"
Community content is available under CC-BY-SA unless otherwise noted.