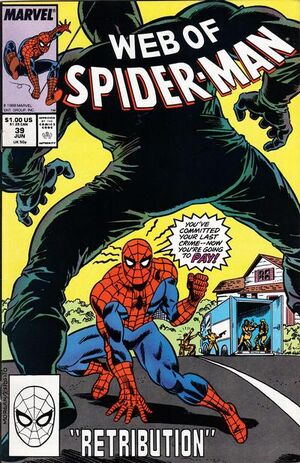 Nathan Lubensky is living alone since Aunt May asked him for leaving his house after Nathan's help the police shoot a hoodlum. He is robbed at his home by Norton Fester, the former Meteor Man and now a drunk homeless. Peter comes by Nathan's house and learns about the robbery. Peter decides to find out who broke into Nathan's house and stole, among other thinks, Aunt May's engagement ring. Soon Spider-man finds out that Fester was the stealer and fights him in the street, near a bus which Aunt May and other friends were going to Manhattan with. Spidey defeats Fester and Nathan gives his ring to Aunt May.

Retrieved from "https://heykidscomics.fandom.com/wiki/Web_of_Spider-Man_Vol_1_39?oldid=1472048"
Community content is available under CC-BY-SA unless otherwise noted.