Part of the 'Inferno (Event)' event 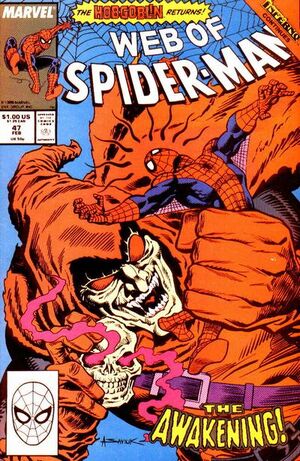 Appearing in "The Face in the Mirror"Edit

Last month, in The Spectacular Spider-Man #146, the effects of Inferno caused Harry Osborn's chemical factory to come to life and attack Harry and Spider-Man. Now the Hobgoblin wants something from Harry, but he may get more than he's bargained for because the Inferno is affecting Harry's mental well-being.

Retrieved from "https://heykidscomics.fandom.com/wiki/Web_of_Spider-Man_Vol_1_47?oldid=1472064"
Community content is available under CC-BY-SA unless otherwise noted.