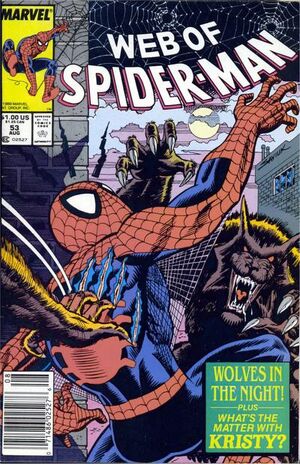 Appearing in "Wolves in the Night"Edit

War strikes the New York City underworld! It's the mutant werewolf Lobo Brothers against the Kingpin and the Arranger, Spider-Man against the Lobo Brothers, with the Chameleon and Hammerhead waiting to clean up!

Retrieved from "https://heykidscomics.fandom.com/wiki/Web_of_Spider-Man_Vol_1_53?oldid=1472077"
Community content is available under CC-BY-SA unless otherwise noted.