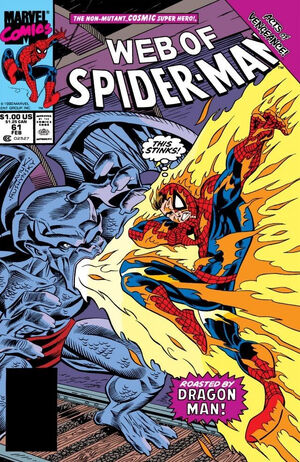 Appearing in "Dragon in the Dark"Edit

An Acts of Vengeance tie-in! "With too much power comes too much responsibility— I quit!" exclaims Spider-Man after suffering the hatred of a united New York society. But when the Wizard sends Dragon Man after Spidey, the web-spinner and society find themselves forced to re-think their decisions.

Retrieved from "https://heykidscomics.fandom.com/wiki/Web_of_Spider-Man_Vol_1_61?oldid=1472092"
Community content is available under CC-BY-SA unless otherwise noted.