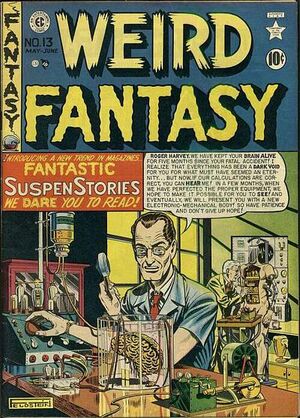 Appearing in "Am I Man or Machine?"Edit

Synopsis for "Am I Man or Machine?"Edit

1 of 4
Add photo
A man dies in a car accident but two scientists preserve his brain in a vat for two years as they build a robot body for him. He goes to see his fiancee and tells her his story. She tells him she married another man a year ago but will ask him for a divorce. He realizes that he is not a proper man and she would come to hate him in time and that he should not have come back. He tells her that his story was just a hoax to get into a frat and goes back to the two scientists.

Appearing in "Only Time will Tell"Edit

Synopsis for "Only Time will Tell"Edit

A man travels back in time to get himself to help him with his time machine and then wonders who designed the time machine in the first place.

Appearing in "The Men of Tomorrow"Edit

Synopsis for "The Men of Tomorrow"Edit

Explorers discover a city of telepaths, and when they teach them speech, they introduce lying and factional violence into the population which destroys them.

Appearing in "Trip into the Unknown"Edit

Synopsis for "Trip into the Unknown"Edit

Humanoid aliens land in Times Square after an atomic war and are harassed by primitive survivors.

Retrieved from "https://heykidscomics.fandom.com/wiki/Weird_Fantasy_Vol_1_13(1)?oldid=110002"
Community content is available under CC-BY-SA unless otherwise noted.