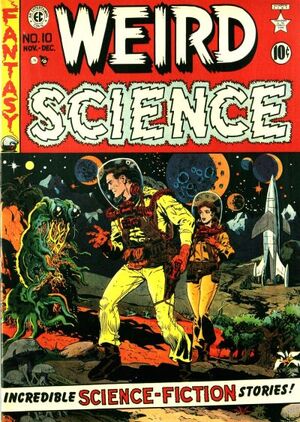 Appearing in "The Maidens Cried"Edit

Synopsis for "The Maidens Cried"Edit

1 of 3
Add photo
This story has the same premise as the movie "Alien", but instead of a horrible monster, the adult form is a beautiful humanoid female which places an egg in the bodies of space explorers. These creatures eat their way out as a horrible monster, then spin a cocoon and emerge as an adult humanoid.

A scientist creates a shrinking device which he pitches to two stadium owners as a way to increase the seating volume of their building. When the current fluctuates the owners are shrunk to a tiny size and trampled by the exiting crowd.

1 of 6
Add photo
An old scientist who has developed a hormonal procedure that can produce transsexual changeovers injects a man who has proposed to his daughter because he doesn't want to be lonely without her. When she reads his notes, she becomes furious and injects herself with the same compound to turn herself into a man, and the couple marry anyway.

This story has a plot somewhat similar to The Twilight Zone episode "The Little People".

Retrieved from "https://heykidscomics.fandom.com/wiki/Weird_Science_Vol_1_10?oldid=110012"
Community content is available under CC-BY-SA unless otherwise noted.