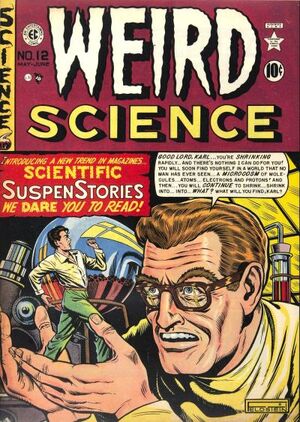 Appearing in "Lost in the Microcosm"Edit

Synopsis for "Lost in the Microcosm"Edit

A scientist's assistant accidentally exposes himself to shrinking gas and travels from world to world in hopes of encountering a society advanced enough to halt his shrinking.

Appearing in "Dream of Doom"Edit

Synopsis for "Dream of Doom"Edit

A man experiences a sequence of dream occurring after dream after dream...

Appearing in "Experiment in Death"Edit

Synopsis for "Experiment in Death"Edit

Scientists develop a procedure that will restore life to a living organism after fifteen minutes of being dead, but since the brain cells have died, the creatures revive insane.

Appearing in "Things" from Outer SpaceEdit

Synopsis for "Things" from Outer SpaceEdit

Hostile aliens from Alpha Centuri with a third eye concealed in the middle of their foreheads have infiltrated high positions in Earth governments.