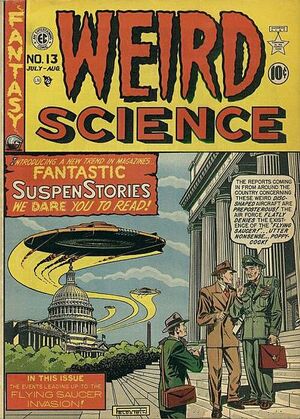 Appearing in "The Flying Saucer Invasion"Edit

Synopsis for "The Flying Saucer Invasion"Edit

The army dismisses eyewitness accounts of flying saucers as psychological but an observatory spots an entire fleet only hours away.

Appearing in "The Meteor Monster"Edit

Synopsis for "The Meteor Monster"Edit

A monster descends from space inside a meteor and hypnotizes people into obeying its instructions. It is defeated when a blind man's seeing eye dog attacks it.

A scientist creates a race of tiny beings in order to observe future scientific advancements once their accelerated evolution moves them beyond man's current developmental stage. They end up developing an explosive power so devastating that they destroy their world and it expands beyond into the scientist's laboratory killing him.

Appearing in "The Man Who Raced Time"Edit

Synopsis for "The Man Who Raced Time"Edit

A scientist invents a machine that speeds up his metabolism so that everything moving around him appears to be going in slow motion. He decides to get rid of a rival by locating his car on the highway and twisting the steering wheel into the path of an oncoming truck, but the machine's effects wear off and he is struck and killed.

Retrieved from "https://heykidscomics.fandom.com/wiki/Weird_Science_Vol_1_13(2)?oldid=110026"
Community content is available under CC-BY-SA unless otherwise noted.