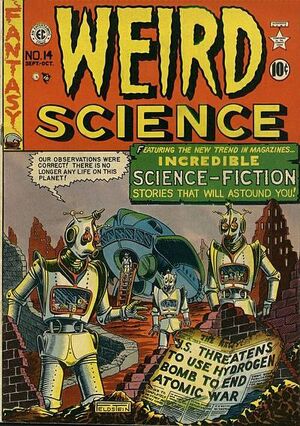 Appearing in "Destruction of the Earth"Edit

Synopsis for "Destruction of the Earth"Edit

A history class on Mars teaches that when Earth detonated a hydrogen bomb the orbit was perturbed and spiraled the planet into the sun.

Appearing in "The Sounds from Another World"Edit

Synopsis for "The Sounds from Another World"Edit

A scientist invents a device which allows him to hear screams of pain when plants are being cut. His device is smashed by a falling tree limb and when he threatens a man with an ax to bandage the damaged tree, he is placed in an asylum.

Appearing in "Machine From Nowhere"Edit

Synopsis for "Machine From Nowhere"Edit

Scientists from the year 3002 send a telepathic dream to a present day scientist in order to build a device which will teleport uranium into the future. The future men have used all the uranium to lay waste the planet and they need more uranium to power their spacecraft off of Earth.

Appearing in "The Eternal Man"Edit

Synopsis for "The Eternal Man"Edit

Dr. Einstein creates a robot duplicate that will live on after his human body dies.

Retrieved from "https://heykidscomics.fandom.com/wiki/Weird_Science_Vol_1_14(3)?oldid=110027"
Community content is available under CC-BY-SA unless otherwise noted.