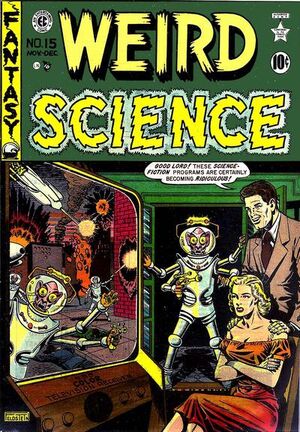 1 of 4
Add photo
Aliens from Jupiter take the opportunity to invade after a radio broadcast panics people about alien invaders because they know no one will take the incoming news reports seriously and mount an effective defense.

Appearing in "The Radioactive Child"Edit

Synopsis for "The Radioactive Child"Edit

The radioactive fallout of a weapon test increases the intelligence of a small Latin American boy so much that he becomes adviser to the country's dictator. The dictator loses patience with him when he desires the secret the hydrogen bomb and beats the child. When the child returns to consciousness, he is once more an ordinary little boy and the dictator is killed when the United Nations retaliates for the aggression across his borders.

Appearing in "House, In Time!"Edit

Synopsis for "House, In Time!"Edit

Appearing in "I Created a ... Gargantua!"Edit

Synopsis for "I Created a ... Gargantua!"Edit

A scientist creates a growth treatment that goes out of control producing a seven hundred foot tall man. The military resolves to murder him as his food intake is too costly.

Retrieved from "https://heykidscomics.fandom.com/wiki/Weird_Science_Vol_1_15(4)?oldid=110028"
Community content is available under CC-BY-SA unless otherwise noted.