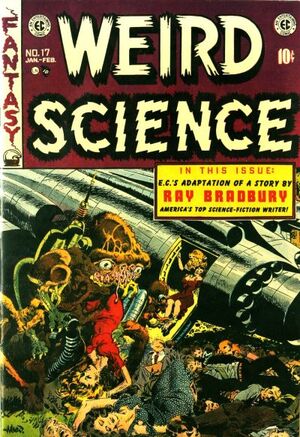 1 of 4
Add photo
A professor has a theory that every so often an alien species harvests humans off of Earth like a turkey farm. The aliens prevent the surviving humans from realizing this is happening to them through hypnotic suggestion. During the course of the story, this happens, and at the end of the story the professor is not even aware that the people he was discussing his theory with at the beginning of the story are no longer there.

Appearing in "The Island Monster"Edit

Synopsis for "The Island Monster"Edit

A gag story about a professor giving a lecture to an empty room except for one person. The professor is so astounded about how statistically unlikely an event it is for his lecture to have only one attendant that he thinks social collapse is imminent. After he proves his theory to the sole man in attendance, the man gets out of his chair and tells the professor that he is the janitor and today is Saturday.

Appearing in "The Long Years!"Edit

Synopsis for "The Long Years!"Edit

Retrieved from "https://heykidscomics.fandom.com/wiki/Weird_Science_Vol_1_17?oldid=110019"
Community content is available under CC-BY-SA unless otherwise noted.