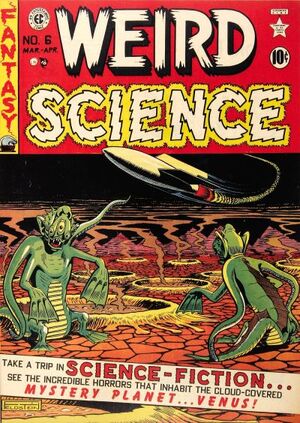 Appearing in "Spawn of Venus"Edit

Synopsis for "Spawn of Venus"Edit

Space explorers find that Venus does not rotate on its axis so there is a four hundred mile strip between the two sterile halves of the planet that contains lush tropics. They land there but three of their number of devoured by native life forms so they depart in horror from what they consider a planet of evil. Before they blast off, a flower bud catches the eye of one of the men and he finds it beautiful so he brings it with him. On Earth, when the flower blooms it releases a blob-like creature identical to the one that killed two of their number on Venus. The people are in a panic because nothing seems to kill it so the military attempts to use an atom bomb on it. All they succeed in doing is multiplying the creature into countless tiny quivering hungry blobs.

Appearing in "Man and Superman!"Edit

Synopsis for "Man and Superman!"Edit

The brother-in-law of a scientist attempts to use the scientist's machine to augment his body building, but ends up disappearing in a burst of energy as he is not able to consume enough mass to sustain his new body.

Appearing in "Sinking of the Titanic"Edit

Synopsis for "Sinking of the Titanic"Edit

A man goes back in time to prevent the sinking of the Titanic and instead causes it.

Appearing in "Divide and Conquer"Edit

Synopsis for "Divide and Conquer"Edit

A scientist perfects a process of multiplying biological organisms when he learns that his young wife is planning to murder him and run away with her lover. He uses the formula on himself to create a duplicate which his wife stabs to death and then injects an overdose into her so that she will replicate over a thousand times becoming smaller with each division.

Retrieved from "https://heykidscomics.fandom.com/wiki/Weird_Science_Vol_1_6?oldid=110008"
Community content is available under CC-BY-SA unless otherwise noted.