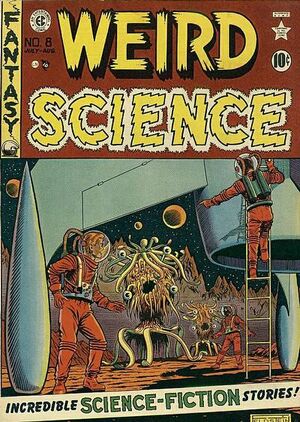 Appearing in "Seeds of Jupiter"Edit

Synopsis for "Seeds of Jupiter"Edit

1 of 4
Add photo
A globe containing fifty monster seeds lands on the deck of an aircraft. One of the sailors gives one to another sailor to suck on as a joke. Just like the chestburster in "Alien" this thing explodes out of the sailor after dehydrating him and falls into the ocean. The monster from Jupiter grows to enormous size and devours all the fish. It attacks Manhattan to eat people as a food source and the humans defeat it by anchoring one of its tentacles so that it cannot slip back into the ocean and blow up the one tentacle it was using to hydrate itself. The secretary of defense returns to his office only to learn that the cleaning lady has thrown the other forty-nine seeds into the garbage on their way to the ocean.

When their rocket's fuel tank leaks after blasting off, the three astronauts realize they are doomed to a lingering death. One of them comes up with the idea that they can construct a parachute and use an oxygen tank to supply enough thrust to allow one of them to return to Earth. They draw lots, but the loser kills the other two and successfully returns to Earth. He is shot dead by a farmer in his field who mistakes him for a spaceman.

A man gets the idea to steal his roommate's girlfriend, and his roommate laughs at him when he tells him that he's really fallen in love with her and wants to marry her. After the marriage she admits to her new husband that she's a robot the roommate had constructed out of loneliness.

A biologist debates the ethics of vivisection with the spaceship captain until they are captured by aliens and put through the same process.

Retrieved from "https://heykidscomics.fandom.com/wiki/Weird_Science_Vol_1_8?oldid=110010"
Community content is available under CC-BY-SA unless otherwise noted.