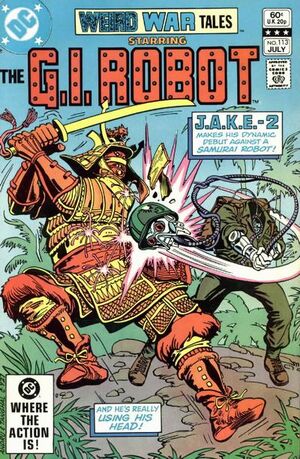 Modern war machines have robbed battle of the personal touch, when all fighting was man-to-man! But I'm not complaining! A machine can kill so many more people than a single human can -- and I'm always there to collect!

Appearing in "The Robot and the Samurai!"Edit

Synopsis for "The Robot and the Samurai!"Edit

On the occupied island of Tattu, Sgt. Blaney and his Green Patrol lament the recent loss of the G.I. Robot who heroically sacrificed his own existence to save American lives. A U.S. fighter plane drops off a large wooden crate containing the G.I. Robot's replacement - J.A.K.E. 02. The soldiers scramble to assemble the various mechanical pieces, but fear their efforts are wasted when the robot fails to activate. On the other side of the island, Japanese officer Colonel Okaida unleashes his own version of the G.I. Robot - Krakko, the Samurai Robot. The Samurai attacks Sgt. Blaney's camp and the soldiers fight back, but their bullets are useless against the heavily armored, sword-wielding robot. Suddenly, J.A.K.E. 02 springs to life and rushes to their aid. Krakko strikes at him with his samurai sword, but the blows do not damage the new G.I. Robot. J.A.K.E. 02 disconnects his own head from his shoulders (still connected by a length of cable), and begins swinging it like a mace. He batters the samurai with his head until his foe ultimately falls to pieces. Blaney and his men are happy that they have an ally like J.A.K.E. 02 on their side.


An Italian soldier stands guard at the border of Wal, a territory held in dispute between Italy and Ethiopia. Bored, he spies a bird flying over head. He aims his rifle and shoots the bird for sport. Nearby, Ethiopian soldiers hear the gunshot and mistakenly believe that they are being attacked. This leads into a two-week long skirmish involving some 2,500 men.

Appearing in "Those Who Ignore the Past"Edit

Synopsis for "Those Who Ignore the Past"Edit

In the distant future, the Earth has been destroyed as a result of pollution and nuclear winter. Those who have survived are a primitive culture eking out an existence in the ruins of a forgotten culture. Analyzing from afar, a group of aliens descend to the planet and introduce themselves to the human tribes. The aliens know the truth about what destroyed this world, and secretly vow that mankind should never again become an industrial nation. As time goes on, the aliens live in harmony with the humans, but the tribes begin to suspect that their extra-terrestrial benefactors are holding back great knowledge. Feeling that they are being oppressed, they revolt against the aliens and learn to manufacture their own weapons of war. Little do they realize that the aliens are actually mutated, evolved humans - descendants of those who left the Earth before it was destroyed.

Retrieved from "https://heykidscomics.fandom.com/wiki/Weird_War_Tales_Vol_1_113?oldid=1467707"
Community content is available under CC-BY-SA unless otherwise noted.