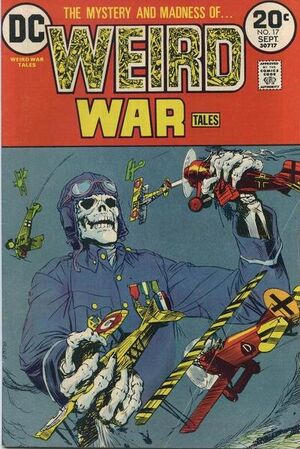 Empty guns have a way of turning on you when you least expect it!

French World War I ace Colonel Victor Bretaine shoots down his 10th plane, piloted by Von Bechten. He orders some wine to celebrate, which is brought by Denise, the object of his desire. However, Denise does not feel anything for him. Suddenly, there is gunfire - a dogfight ensues above. The winner, after downing two German planes, is Lt. Andre Voison - replacement pilot. In the following days, it seems that Denise has grown close to Lt. Voison, much to Col. Bretaine's chagrin. As the weeks pass, Lt. Voison's feats almost match the Colonel's, so he is sent on a suicide mission to destroy the gas depot in Neuilly. Suprisingly, Lt. Voison and his plane return - however Lt. Voison is dead! The plane taxi's itself directly at Col. Bretaine and his hands get chopped-off in the propeller. The Colonel begs a doctor to graft hands on him, and so the doctor is happy to oblige, but feels that there is no reason to tell him that the hands belonged to Lt. Voison. With his new hands, he decides to fly to Neuilly to finish the job Lt. Voison was sent to do. He decides that the job is too difficult and that he should turn back, only his hands will not let him. They see strangle him and see the job through, crashing the plane into the gas depot.

Appearing in "A Gun Named Marie!"Edit

Synopsis for "A Gun Named Marie!"Edit

Glenn Rust has only been on the front a few days. He always cleans his rifle "Marie", which his fellows tease him for naming. As an assualt breaks out, Glenn and "Marie" take down the enemy one by one, as his friends fall around him. As the Nazis push the attack, "Marie" runs out of ammo at a critical time - just as Major Erich von Strich approaches! the Major shoots him, and Glenn hollers out her name - "Marie". The Major laughs at the dying soldier having named his gun, and picks it up to examine it. Yet, it seems that "Marie" has the last laugh, as she fires off a last round straight at the Major!

Retrieved from "https://heykidscomics.fandom.com/wiki/Weird_War_Tales_Vol_1_17?oldid=1467517"
Community content is available under CC-BY-SA unless otherwise noted.