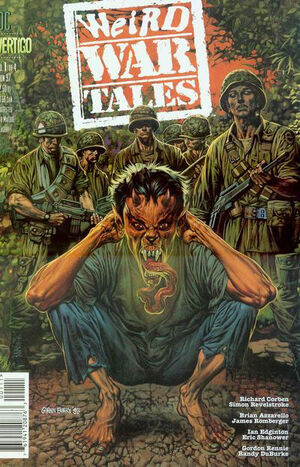 On August 3rd, German U-Boat U-40 was sent on a secret mission for the Kaiser and encountered a wreckage. The crew discover a crazed survivor, who enigmatically warn the U-Boat's captain with the words "rising and rising... giant lobed eye... coming to get us... coming to get you." The captain is needlessly offended and heartlessly kill the survivor, stating that he personally survive drifting in the ocean without suffering hallucination. Suddenly, out of the mist, a large constructed and stench landmass emerge.

As ordered on their mission the crew of U-40 are to explore and seek a potential base on the landmass. Once continuing on the landmass, the crew began to have ominous feelings about this landmass, which one believes that the rocks are moving.

The party soon discover strange, very ancient geometric ruins that strangely resembles to bunkers. They are then attacked by large, sentient red fungi, the landmass' true inhabitants. The fungi killed the party except for the captain, who escape back to the submarine where he see the fungi as what makes the landmass. The captain fired the fungi with the U-boat's main gun, but is swept away by the ocean's waves from the receding living landmass.

Sometime later, the captain, now insane, is shipwrecked and is found by a British warship, the HMS Hornblower. The captain tries to warn the ship's captain of what he saw, but his words are uncomprehending. He then madly waves his pistol, threatening to kill the British captain if he doesn't stop the ship from heading towards where the landmass, but is then shot to death by the ship's captain himself.

The body of the German captain is dumped into the sea, as the Hornblower's captain writes his report and notice a strange smell...

A streetbanger name Tony is newly released from prison for killing a vice lord and his reputation, and is returning to his gang the Sixty Tray. Tony believes himself as a soldier in his gang war.

Tony returns to his awaiting family and gang. There his gang give him his gun which they then plan on getting back at the one who ratted Tony to prison, Twenty Ze of the Vice Lords. Throughout the night Tony is obsessed about "the mission".

The next day, Tony and the Sixty Tray drives to Twenty Ze's home where they expected to surprise him. However, they are themselves attacked by the Vice Lords, who expected their arrival. Tony's gang are killed, and Tony, realizing the hopelessness and reality of his desire of his "mission" force him to run for his life into an alley where he once in his life prayed. Remarkably his prayer is answered in a vision of an entity that resemble to a Norse god that represent gang violence throughout the ages. Tony is awed by this being and realizing its nature, which perpetuate "soldiers" like him the desire to fight.

Tony immediately pick himself up and shoot the Vice Lords. But in the end he is killed with a shot to a head by another member of a gang. In death, Tony saw what is coming for him: "blonde bitcheson flyin' horses."

Appearing in "The Willow Warriors"Edit

Synopsis for "The Willow Warriors"Edit

Setting in Feudal Japan, two shoguns, on orders from their masters, have been waging a bloody war against each other for generations. Though their war remain indecisive. This impatiently frustrated the shoguns and sought another way to satisfy their pride. The two decided to have their most mightiest champions to fight against each other on their behalf.

The two chosen samurais face off on an islet as both the Shoguns' armies watch. The samurais took stance. However, the samurais remained on their stance for hours, which turn to days, and then turn into months. During that wait both the shoguns' armies have settled camp to watch this in fascination as they completely abandon their animosities for each other.

Finally once the season changed into winter, the shoguns, grown impatient, confront their champions. To their shocking discovery, the samurais are already dead. The samurais were so powerful that they are evenly matched between them, and they don't know what each others' intentions on their move, which their honor forced them to stood their ground, and waited and die. The shoguns took this as a sign from the gods and declared that there would be peace between them. To seal that peace, they buried their champions where they stood, marking each grave with the seed of a willow tree.

Over time, the trees remarkably grown to resemble as if they are bowing to each other.

A unnamed Vietnam War veteran talks to a psychiatrist of his problem, which he points out that this is entirely not a typical post-war traumatic story. He tells the reason why he came for therapy because he was called by his former comrade Gopher who told him two words: "Cu Chi".

The story begins in 1967, the veteran and his unit was stationed in the Cu Chi district, northwest of Saigon, which is in Vietcong territory. The unit has been trying to clear the area of enemy forces several times, but the enemy have been keep coming back. It is not until that they realize that the Vietcong had been living in underground tunnels throughout the war, which the veteran immediately knew that America can't win this war.

As more tunnels are discover, Operation Cedar Falls was initiated with Cu Chi evacuated and aerial bombers unleashing napalms, agent orange, and etc. in annihilating the district. The tunnels, however, were still there. The veteran and his unit became one of the Tunnel Rats in clearing out the tunnels. Once in the tunnels, the Tunnel Rats discover corpses of fallen Vietcong that were buried by their members as they have been living in the tunnels for unprecedented time given the constant aerial bombardments. But the long captivity also winded down their food supplies. The veteran and the Tunnel Rats discover something worse than they imagined - the Vietcong that lived under have become cannibalistic creatures and have been eating their own dead. The cannibals see the Tunnel Rats as food, overwhelming and taking one of them. The veteran and Gopher escape and bombed the tunnels. Afterward, they again went back into the tunnels to make sure that every living thing in there is dead before dynamiting the tunnels for good. However, this wasn't the end...

The veteran then explains that the tunnels went too deeper than they had thought, and believe that it stretches into a huge network that spreads out under the Earth, and that there are more creatures who have been breeding and digging for years. The veteran at first laughed at this thought from Gopher, but his old comrade insisted that they are down there, have caught their scent and can hear them scratching through the dirt under his house. Two days later Gopher disappeared and the police baffling discovered a large hole in Gopher's basement. The veteran reveals that he too had been hearing scratching sounds coming from under his own basement. Having told everything to his psychiatrist, the veteran doesn't care if he consider himself crazy and matters that he will be ready for the creatures.

After the veteran left, the psychiatrist report his case of the veteran as suffering from bathyphobia (fear of subterranean spaces) that cause him be delusional to see the creatures he saw during the war (also which there hasn't been any existing evidence to support the "Cu Chi cannibal incident").

Once returning to his home, the veteran went down to his basement with his assault rifle ready and patiently waits as scratching sounds are heard coming from the ground... with a tiny hole finally chipped through.

Retrieved from "https://heykidscomics.fandom.com/wiki/Weird_War_Tales_Vol_2_1?oldid=1467730"
Community content is available under CC-BY-SA unless otherwise noted.