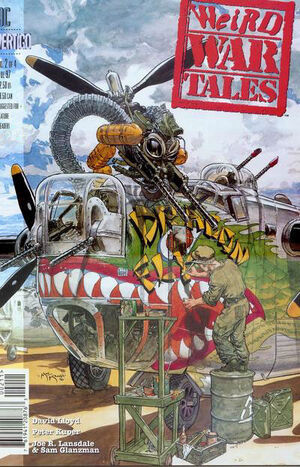 A young man name Danny Coogan is a social outcast among his townspeople and had a desire to become a helicopter pilot in the military, but has been turn down several times in the local recruiting center.

On a particular afternoon, Danny left his home and went to the shooting center. After his shootout, Danny left too soon which ponders the others who knew him, which one of them recalls him saying about having a "mission".

Danny went to the recruiting center and gunned down everyone inside with his assault rifle. Danny then went to a store and a barbershop where he also gunned the people who looked down on him. The authorities arrive on the scene but Danny had left.

Danny return home where he shoots his mother as she was making him flap-jacks for him for lunch, which goes against his regimen.

A Apache gunship pilot receives the call from the sheriff for aerial assistance for searching Danny whose driving in his pickup truck. Finally the authority finds Danny and chase him to a nearby military base. Danny stops in front of the base where he then steps out his pickup and looks up in awe at the gunship which hovers in front of him as the police surrounds him.

Mightier shows a someone writing a document for declaration of war. The pen that the person is writing changes into a missile which the scene shifts to the said missile targeting a city and destroying it in a nuclear explosion.

The scene changes back to the writer (who reveals to be the President of the United States) finishing in writing his signature on the document.

Union soldier Bill Insteem is imprison in the notorious Andersonville Prison where the health and living conditions are worse, and survival is key for the prisoners.

Bill is met by a drummer boy named Carl Fuller who warns him the conditions and the other prisoners who are willingly to attack their own comrades-in-arms for food and supplies. Carl gives Bill the basic need for survival and introduced to his friends Draighten Smith and Jack Slater which the four made of pact of friendship between them in their need for survival. Bill reveals his background as a clockmaker and his somewhat mystic obsession with time.

One month later, the prison is struck by a strong storm. Bill's tent is blown away and sought shelter with Carl. Carl's is then blasted by the storm and Carla and Bill are blown into a makeshift tunnel. Bill then discover that Carl is a woman. Carl, whose real name is Carol, explains to Bill that she wants excitement during the war and enlisted as a man. Also the tunnel that they are in was secretly dug by Carol, Draighten, and Slater (which the later two don't know Carol's secret) to escape their imprisonment and are several month close to escape. Bill swear to keep Carol's secret safe, and the two sooner reveals their attraction to each other and make love.

A day later, the four continue to make headway in their escape tunnel. Bill and Carol to continue their love and swear to each other that will marry each other once they escape. Carol gives Bill a bottle which she states contains her soul as to be kept safely away from their current situation.

On a afternoon, Bill loudly announce to his friends that he have more rations. This attracts from the other inmates which they fought Bill and his friends, ending with Bill the only one live.

That night Bill bury his friends and love, and promise them that he will avenge their deaths. For a month, Bill worked on building a construct from rubbish which his continue obsession cost his health to degenerate. Bill, heavily malnourished, dig up Carol's rotted remains and construct it to his creation, a clock-work puppet. Bill finally place Carol's bottle containing her soul onto his creation, which comes to life.

The Carol construct comes to her killers' encampment and gruesomely slaughters them. Carol returns to Bill, who is now dead, and drags his body to the secret tunnel and cause the tunnel to cave in and bury themselves.

Retrieved from "https://heykidscomics.fandom.com/wiki/Weird_War_Tales_Vol_2_2?oldid=1467732"
Community content is available under CC-BY-SA unless otherwise noted.