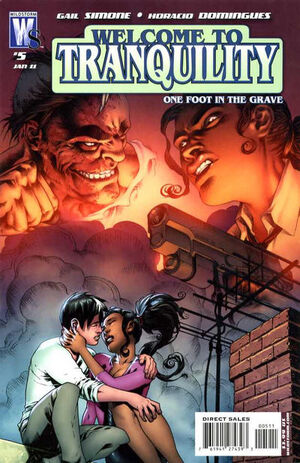 Appearing in "Homecoming, Part Five: Battle of the Bands"Edit

Synopsis for "Homecoming, Part Five: Battle of the Bands"Edit

The Sidewinder Spirits spirits surround Seresa Lindo as she lies dying. They sense that Coyote Kid is fading after his battle with Derek Fury so they offer to make Seresa the Spirit of Vengeance. But her sister Tommy arrives so the Spirits leave Seresa with the option to choose in the future if she wants it. Slapjack arrives to take Seresa to the hospital.

Tommy recounts how she met Derek when they were kids and she instantly liked him even though she knew something was strange about him and the fact his parents seemed to keep him a secret. They dated through out all of school until Tommy found out she was pregnant.

Mayor Fury tries to take Pink Bunny and flee the city so the other residents won't get hurt but she refuses to go. He knocks her out and then goes to Doc Tomorrow to see if he has anything to use against Derek. Meanwhile, Derek makes his way towards The Liberty Snots's concert.

Retrieved from "https://heykidscomics.fandom.com/wiki/Welcome_to_Tranquility:_One_Foot_in_the_Grave_Vol_1_5?oldid=1473819"
Community content is available under CC-BY-SA unless otherwise noted.