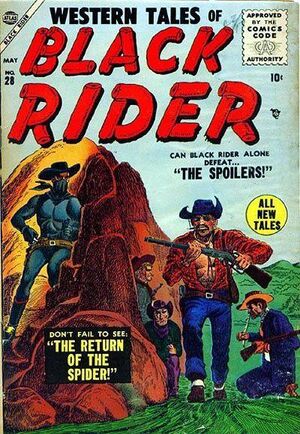 Ace Darcy and his gang have come to Leadville intending to set up a gambling hall in town. The Black Rider refuses to allow them in, as gambling has been outlawed in the region. However, the hero is shocked to find that Sheriff Ben Yarby is allowing it. When he refuses to believe it, the Black Rider beats on Ace and tells him and his men to check out before dawn or face his wrath. However, when the Black Rider goes to talk to Yarby he learns that Yarby has allowed Ace to build a gambling hall in the area, but tearfully tells him that he cannot explain why.

Changing into his alter ego of Dr. Matthew Masters, the Black Rider wonders if this sudden turn of events has anything to do with Yarby's son being ill. Returning to his medical practice, he and Marie Lathrop continue caring for the boy. Learning that the medicine needed to treat the boy has been stolen in a recent coach robbery, Masters returns to his practice and sees that Ace has set up his gambling hall on his way back. With no means to save the boy, Masters laments over the situation when suddenly Sheriff Yarby arrives with the medication. The sheriff reveals that Ace and his men stole the medication needed to cure his son and forced Yarby to allow the gambling hall to be built in exchange for it. Shamed, Yarby takes off his sheriff's star he goes off to face Darcy alone.

Fearing for Yarby's fate, Masters leaves Mary to administer the medicine to Yarby's son and slips away to change into the Black Rider. The masked hero is there to help Yarby cut through Darcy's gang. When Ace attempts to blow up the gambling hall with explosives, the Black Rider shoots the wick off the explosives and apprehends Ace. Later with Yarby's son expected to recover, Matthew Masters gives Yarby back his sheriffs star.

Appearing in "The Return of the Spider"Edit

Synopsis for "The Return of the Spider"Edit

White out riding, the Black Rider spots Bobby Lathrop fleeing in a panic on foot. He catches up with the boy and calms him down with a sedative and Bobby explains how he was exploring Ghost Canyon Cliffs when a madman tried to attack him and chased him away after scaring his horse. The Black Rider then returns Bobby to his father and sister then goes back to investigate who Bobby might have seen. He finds the long abandoned cave dwellings of a Native American tribe that used to live there including a skeleton left among the remains of a recently made camp.

Meanwhile in the town of Fiesta, the town jailer is shot dead by the Spider, the Black Rider's old foe[1] who had survived their last encounter. He has come to free the remaining members of his gang, freeing those who agree to go with him and killing those who don't and flee town. The next morning Dr. Matthew Masters is visited by the sheriff of Fiesta who asks him to examine the dead bodies at the jail. There he finds the mark of the Spider on the dead prisoners and realizes his old foe had survived their last encounter. Just then the Spider and his minions race through the town, but the sheriff and his men gun down the gang, but the Spider manages to escape.

Slipping away to change into the Black Rider, Masters follows after the Spider, and is led to back to Ghost Canyon Cliffs. There he is confronted by his old foe, who explains that he was saved from the fire by a Mandan medicine man who nursed him back to health in the cave, after healing the Spider murdered him. The two fight it out until the Spider lunges at the hero, but the Rider dodges out of the way. The Spider is sent flying over the cliff and falls to what the Black Rider believes to be his final death.

Appearing in "Death Leaves a Card"Edit

Synopsis for "Death Leaves a Card"Edit

The next morning, Matthew Masters is running a routine check up on Bobby Lathrop, the only person in Leadville who knows Master's double identity. Bobby tells Matthew how he spied someone watching Matthew as he returned home as the Black Rider. Suddenly some of Skinner's men come bursting in demanding that Masters comes with them to "heal" one of their men. Masters refuses to fall for the ploy and is taken prisoner at gun point. He is taken back to Skinner's hideout unaware that Bobby is following behind.

Retrieved from "https://heykidscomics.fandom.com/wiki/Western_Tales_of_Black_Rider_Vol_1_28?oldid=1472686"
Community content is available under CC-BY-SA unless otherwise noted.