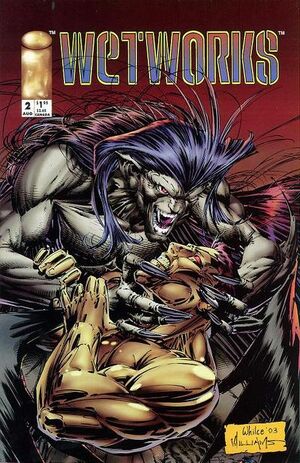 At Waering Industries in Washington, D.C., Dane and CEO Armand Waering observe as company scientists test the members of Team 7 and their symbiotes against training robots. Waering tells Dane they are just the weapon he needs to wipe out the Vampire Nation and that, as a member of the U.S. National Security Council, he can protect them from IO.  Frustrated, Dane leaps into the fray and finishes off the remaining robots.  Unaware that it was Waering who chose Team 7 for the Transylvania mission, Dane accepts Waering’s offer.  In New Orleans, the ruler of the Vampire Nation known as the Blood Queen and her bodyguard Persephone watch footage of Drakken rallying for war against humanity. Persephone is anxious, but the Queen is unconcerned.  Persephone questions exposing Team 7 to the symbiotes. The Queen responds that they may prove useful, particularly Dane whom she refers to as her “chosen one”.  At IO, Craven insists to his second-in-command John Lynch that they must recover Team 7 and the symbiotes.  Lynch retorts that Dane will come for him.  At Fort Detrick, Maryland, a group of vampires called Beastmasters led by Drakken’s brother Drago rob a military convoy and steal a quantity of the lethal Lassa virus.  Later, Mother-One briefs Team 7 on the theft, identifies the vampires’ likely target as an upcoming concert in New York, and directs the team to prevent the attack.  Afterward, Dane tries to get some sleep but has a nightmare in which he is attacked and killed by a vampire.