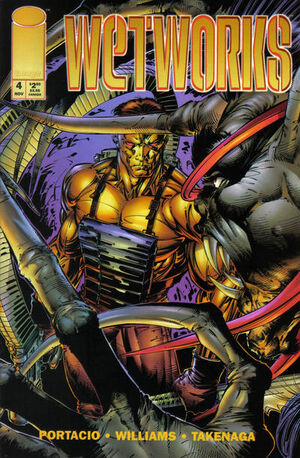 In Wetworks’ new headquarters below the Golden Gate Bridge, Dane and Mother-One watch as Grail counsels a despondent and disabled Dozer.  Dozer’s symbiote has caused his muscles to swell to gargantuan proportions, immobilizing him.  Grail has figured out how use his symbiote to control the energy of his life force—his chi—and gives a portion of it to Dozer to focus on.  Waering summons the team to a meeting and discloses that Drakken has been located in the Amazon.  Waering wants Wetworks to intercept Drakken and eliminate him.  In exchange for help bringing down Miles Craven, Dane agrees. Elsewhere, Craven tells Ben Santini the Daemonites have targeted a defunct lab and that he is arranging for another group to intercede.  Wetworks deploys to the Amazon and moves into position as Drakken tries to negotiate a deal with the Daemonite lord Defile.  With their symbiotes telepathically linked through Mother-One, Wetworks attacks.  Defile teleports away just as Dane fights his way through vampires to get to Drakken. Suddenly, Void teleports in with the WildC.A.T.s.