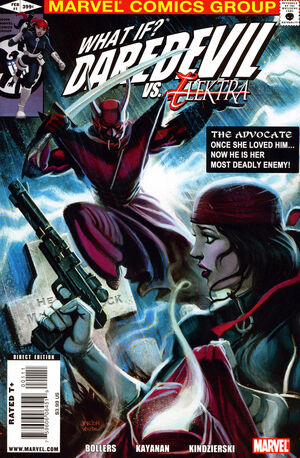 Publisher
Marvel Comics
Previous Issue
Next Issue
What If...? World War Hulk
What If...? Astonishing X-Men

Say to hell with your emotions... and stay alive long enough to send these gory bastards back to wherever they crawled out from. It's been an honor.

Appearing in "What If Daredevil Died Saving Elektra?"Edit

Daredevil. Elektra. Once upon a time they were star-crossed lovers, but then fate took a tragic twist leading them down wildly separate paths. He became Hell's Kitchen's blind seeker of justice while she became a servant to the Hand and their deadliest ninja assassin. But What If...events occurred differently? What If DD was inducted into their evil order in her place? WHAT IF DAREDEVIL DIED AND WAS RESURRECTED BY THE HAND? If that question provides you a gnat's whisker of intrigue, then you definitely won't want to miss this What If special based on the seminal early 80s Daredevil run by Frank Miller and Klaus Janson! By Karl Bollers (WOLVERINE: HUNGER) and Rafael Kayanan (Conan The Barbarian). Plus a “SAY WHAT?” comedy strip by Mike Gallagher (Mad Magazine) and Dave Manak (Spy Vs. Spy).

Appearing in "Say What? Daredevil Vs. Elektra"Edit

Synopsis for "Say What? Daredevil Vs. Elektra"Edit

Retrieved from "https://heykidscomics.fandom.com/wiki/What_If%3F_Daredevil_Vs._Elektra_Vol_1_1?oldid=1517935"
Community content is available under CC-BY-SA unless otherwise noted.