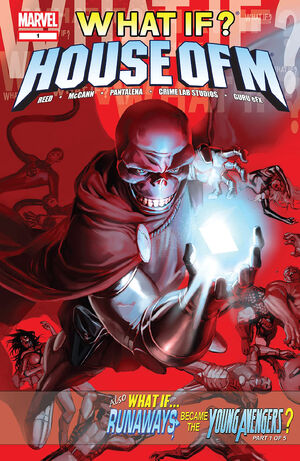 Publisher
Marvel Comics
Previous Issue
Next Issue
What If? Spider-Man Vs. Wolverine
What If? Fallen Son

I did not come all the way from Queens to get my ass kicked. I came here to fight.

Appearing in "What If...Scarlet Witch Ended the 'House of M' By Saying, 'No More Power?'"Edit

Synopsis for "What If...Scarlet Witch Ended the 'House of M' By Saying, 'No More Power?'"Edit

In this story, all of the heroes of the world lose their powers with mixed results. Thing is human, Doctor Strange tells Wong that he can't connect with magic, Wolverine's adamantium skeleton is too heavy, Ms. Marvel and She-Hulk are normal, Cyclops doesn't have to worry about wearing special glasses, Maria Hill delivers a report that the superpowered inmates at the Raft have lost their powers, Spider-Man is relieved at the loss of his "responsibility," Iron Man believes there is still work to be done, and most of the X-Men try to resume normal lives. Iron Man speaks to the Illuminati members about this problem. Outside of the news that this event uncovered some Skrulls on Earth, they talk about what to do next. Red Skull obtains a cosmic cube and uses it to take over New York. After killing the Young Avengers, Reed Richards and a newly fully-human Ben Grimm, Red Skull declares his intentions to take over the world. Iron Man (who had been freelancing against the non-superpowered villains) appears along with several other heroes, including Wolverine, War Machine, and Carol Danvers, all of whom are outfitted with special suits of Iron Man-esque armor (Wolverine's includes laser-claws). The X-Men appear, using remaining Shi'ar technology in an attempt to stop Skull. After he defeats them, Spider-Man, who had been watching the news of Skull's attack with his newly pregnant wife, Mary Jane, uses his old mechanical web-shooters to steal and crush the Cube from the Skull, before leading the collected depowered community into battle against Skull and his forces, shouting "Avengers assemble!" Many years later, a white-haired Tony Stark is shown visiting Spider-Man while he and his daughter, named May, play with his granddaughter, Anna. They remark on the reason that humans would have appeared as heroes, stating that if things get bad enough again, more of "their kind" will emerge. As he says this, Anna is shown leaping from a monkey bars after a butterfly with uncanny grace and agility.

Retrieved from "https://heykidscomics.fandom.com/wiki/What_If%3F_House_of_M_Vol_1_1?oldid=1472710"
Community content is available under CC-BY-SA unless otherwise noted.