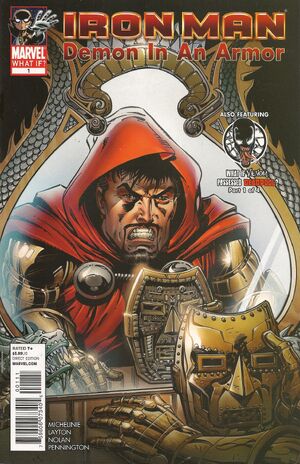 Publisher
Marvel Comics
Previous Issue
Next Issue
What If? Spider-Man: House of M
What If? Wolverine: Father

Appearing in "What if Tony Stark had become Doctor Doom?"Edit

Would Tony Stark still be Iron Man...if he wasn't Tony Stark? Twenty years ago, in a college experiment gone bad, the young Stark's mind is transferred to the body of impoverished but brilliant fellow student, Victor von Doom! Blamed for the unsanctioned research, his memory wiped clean, Tony is deported and forced to face life as a disgraced Latverian commoner. Meanwhile, von Doom grows and flourishes in the wealth and privilege of being sole heir to Stark Industries. Thus, in separate cauldrons on different sides of the world, both Iron Man and Dr. Doom are forged anew. But who are the men inside the armors...really? Find out in "WHAT IF TONY STARK HAD BECOME DR. DOOM?", co-plotted and written by David

Michelinie ("IRON MAN: THE END"), pencilled by Graham Nolan ("X-MEN FOREVER") and co-plotted and inked by Bob Layton ("HERCULES: TWILIGHT OF A GOD"). PLUS, What If: The Venom Symbiote Possessed Deadpool – Part 3!

Appearing in "What if the Venom Symbiote Possessed Deadpool?" Part One of FourEdit

Synopsis for "What if the Venom Symbiote Possessed Deadpool?" Part One of FourEdit

Retrieved from "https://heykidscomics.fandom.com/wiki/What_If%3F_Iron_Man:_Demon_in_an_Armor_Vol_1_1?oldid=1481492"
Community content is available under CC-BY-SA unless otherwise noted.