Start a Wiki
What If Spider-Man Joined the Fantastic Four? 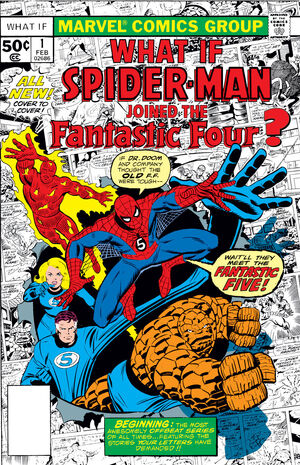 Publisher
Marvel Comics
Previous Issue
Next Issue
—
What If? #2

Look at the size of this gapin' glob! If I saw 'im in one'a them Comic-Mags the Marvel people put out about us-- I'd think they'd flipped their gourd!

-- Thing, regarding the Giant Octopus

Appearing in "What If Spider-Man Joined the Fantastic Four?"Edit

Synopsis for "What If Spider-Man Joined the Fantastic Four?"Edit

In this landmark first issue we are greeted by Uatu the Watcher, who explains to the readers that there exists a number of alternate realities. In each alternate reality, there is a divergence from what what has happened and what could have happened.

With Spider-Man on the team, his association with the Fantastic Four grants him acceptance from the population unlike his mainstream counter part who is labeled a menace by the Daily Bugle.

The Fantastic Five begin taking on a number of villains, including the Vulture and the Red Ghost and his Super-Apes. While Mr. Fantastic, Thing, Human Torch and Spider-Man go on these adventures, the Invisible Girl often stays behind to monitor things from base.

Sue is eventually seduced into meeting Namor the Sub-Mariner who is under the control of the Puppet Master to get revenge on the Fantastic Five.

First time I ever saw a female who could keep her mouth shut so long!
— Ben Grimm, while Sue held her breath under water

After freeing Sue and Namor from the Puppet Master's control, Sue decides that she loves Namor and wants to stay in his kingdom with him, after months of neglect from the Four thanks to Spider-Man's inclusion in the group. Accepting her request, Namor conditions her body so that she can breath underwater (a process that is apparently permanent) and the remainder of her former comrades leave in defeat, Spider-Man regretting have joined the group.

Retrieved from "https://heykidscomics.fandom.com/wiki/What_If%3F_Vol_1_1?oldid=1543312"
Community content is available under CC-BY-SA unless otherwise noted.