Start a Wiki
What If Rick Jones Had Become the Hulk? 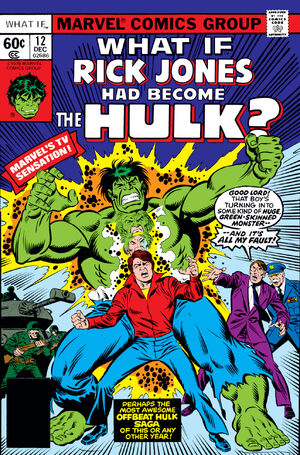 Publisher
Marvel Comics
Previous Issue
Next Issue
What If? #11
What If? #13

Soldiers... uncool! Soldiers don't fight fair! Use shivs... heaters! So I am called "Hulk", huh? Well, Hulk won't rumble with soldiers... but will cut out instead!

Appearing in "What If Rick Jones Had Become the Hulk?"Edit

Synopsis for "What If Rick Jones Had Become the Hulk?"Edit

Rick pushes Bruce Banner into the ditch first, causing his transformation into the Hulk. While Banner dedicates his life to curing the boy, Rick goes on to join the Avengers, become Cap's second Bucky, and swap atoms with Captain Marvel. Eventually, Banner manages to separate Rick from the Hulk while they're in the middle of a battle with Annihilus in the Negative Zone. Rick is rescued, and Hulk beats Annihilus into submission, becoming the new respected ruler of the Zone, admired and loved by the residents there.

Rick and Captain Marvel are also separated, causing Mar-Vell to live freely without having to return to the Negative Zone.

Retrieved from "https://heykidscomics.fandom.com/wiki/What_If%3F_Vol_1_12?oldid=1472732"
Community content is available under CC-BY-SA unless otherwise noted.