Start a Wiki
What If Spider-Man Had Never Become a Crimefighter? 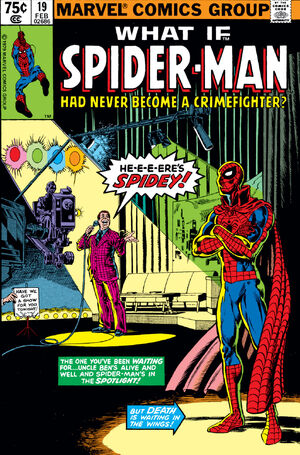 Publisher
Marvel Comics
Previous Issue
Next Issue
What If? #18
What If? #20

Appearing in "What If Spider-Man Had Stopped the Burglar Who Killed His Uncle?"Edit

Synopsis for "What If Spider-Man Had Stopped the Burglar Who Killed His Uncle?"Edit

After a successful wrestling match, the new celebrity Spider-Man witnessed a robber and thought to himself how helping the cop would help him as well. He quickly halted the thief and made the next day's issue of the Daily Globe. As J. Jonah Jameson lost his cool over the Globe's exclusive, Spider-Man met with film producer J. B. Priest about a movie deal.

Later that night, after brushing off "Flash" Thompson at school, Peter Parker once again donned his Spider-Man costume and guest-hosted on The Tonight Show Starring Johnny Carson where he interviewed an actress. The episode was interrupted with a news report announcing the death of John Jameson and when Peter returned home, he revealed his identity to his aunt and uncle. When Ben tried to talk Peter out of becoming a celebrity and focusing on his education, Peter angrily left them and in the time that followed, Spider-Man became a successful movie star with The Amazing Spider-Man, starring Marlon Brando and Gene Hackman. When J. Jonah Jameson had Ned Leeds figure out Spider-Man's identity and published it in the Daily Bugle, Spider-Man threatened Jameson's life, then passed it off as a joke to get the point across not to cross him again.

The next day, Spider-Man set off to start the next phase of his career by sneaking into the Baxter Building. After "testing" the Fantastic Four, Spider-Man offered them his services as their licensing and promotion agent. In the weeks that followed, Spider-Man also signed up the Avengers and the X-Men, following that up with buying Marvel Comics. After witnessing Daredevil's battle with the Fixer, Spider-Man offered his services to Daredevil. Spider-Man's first act was to replace Daredevil's yellow costume with a red costume involving a trident which angered Daredevil, who thought the trident was pointless. Despite that, Spider-Man remained Daredevil's agent and placed billboards around the city promoting the hero. Determined to discredit Spider-Man, J. Jonah Jameson wrote an article for the Daily Bugle announcing its federal court suit against Spider-Man's promotion of a vigilante.

In an effort to ruin Jameson in retaliation, Spider-Man followed his secretary Betty Brant as she met with the Enforcers to pay off her brother's gambling debts. Discovering the Big Man's identity of Frederick Foswell, Spider-Man had the Daily Globe write an article revealing Foswell's connection to the Daily Bugle. The article cost Jameson his job when Lawrence Dyson tried to get Jonah to take a less direct hand with the Bugle, offering his emeritus status at full pay. Angry, Jonah resigned instead. When Foswell asked to see Jonah, Jonah met with him and was given the opportunity to use Foswell's organization to ruin Spider-Man at the expense of running his rackets for him. Jameson declined the offer but began thinking that he had nothing else to lose.

Six months later, during the filming of Spider-Man vs. the Monster That Ate Los Angeles, Spider-Man was zapped by an unscripted electric shock given off by the film's monster Dragoom. Luckily, he was saved by Daredevil and later, Daredevil visited Peter Parker at his mansion and warned that the shock could have killed him. He also explained that Spider-Man had a hit out on him and offered to stay and watch Parker's workout, thinking that he might be in danger. During the workout, Parker was slashed with poison-tipped claws by a disguised Kraven the Hunter.

Two days later, Parker finally agreed that someone was trying to hurt him. Soon after, Parker met with the writers of his next movie and just as Daredevil noticed the scent of spirit gum and latex, Parker fell through a trap door. When he recovered, he discovered that the "writers" were all supervillains in disguise. Daredevil immediately jumped to defend Spider-Man but was soon overwhelmed by the sheer number of villains. In order to save Daredevil's life, Parker also joined the fray as Spider-Man and too, defeating the villains one-by-one.

After checking on the barely-breathing Daredevil, Spider-Man unmasked the mastermind behind the attack as J. Jonah Jameson, who blamed Spider-Man for everything in his life gone wrong. Spider-Man then realized that he had, in fact, destroyed Jameson's life by not acting responsibly with the gifts he had been given.

Retrieved from "https://heykidscomics.fandom.com/wiki/What_If%3F_Vol_1_19?oldid=1472739"
Community content is available under CC-BY-SA unless otherwise noted.