Start a Wiki
What If the Hulk Had the Brain of Bruce Banner? 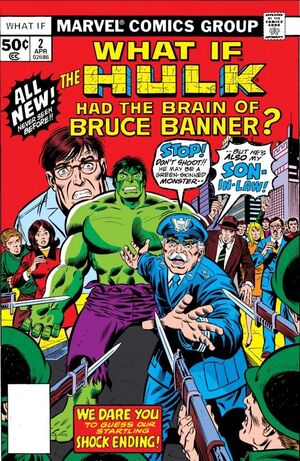 Publisher
Marvel Comics
Previous Issue
Next Issue
What If? #1
What If? #3

I am the ultimate self-induced mutation-- the living embodiment of the unknown-- of that which scientists have ever called "X"! I am the X-Man!

Appearing in "What If the Hulk Had Always Had Bruce Banner's Brain?"Edit

Synopsis for "What If the Hulk Had Always Had Bruce Banner's Brain?"Edit

Bruce Banner, Reed Richards and Charles Xavier constructed an improved version of Cerebro called the Psychotron which merged their physical and mental beings into one being, X-Man. They were forced to use it (as it only worked once before blowing up), to defend the world from Galactus. They won the battle, at the expense of all of their super powers, and inadvertently turning Thing into a mindless monster, much like the Hulk.

Retrieved from "https://heykidscomics.fandom.com/wiki/What_If%3F_Vol_1_2?oldid=1472722"
Community content is available under CC-BY-SA unless otherwise noted.