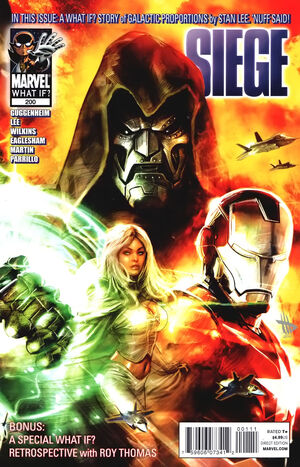 Appearing in "What If...Norman Osborn won the Siege of Asgard?"Edit

Synopsis for "What If...Norman Osborn won the Siege of Asgard?"Edit

In an alternate reality, Ares decides to go with his instincts, attempting to kill Norman Osborn before the Siege of Asgard. However, he is stopped and killed by the Sentry. Unlike Earth-616, Sentry wasn't weakened by killing Ares during the Siege and entered the battle fully rested. Sentry quickly kills the Avengers when they arrive to assist Asgard. Iron Man, the X-Men and the Fantastic Four arrive to help but are all overwhelmed. Emma Frost, Doctor Doom, Namor and Loki conspire to stop Osborn, who's planning on usurping the President. They bring Bullseye before the Sentry and reveal to him that he killed his wife, Lindy. However, the Void surfaces in Reynolds and he kills everyone including the Cabal and the Dark Avengers before going after the rest of the planet. This Earth's Watcher, Atau, converses with Uatu and tells him that as with the Watchers' duty, they cannot interfere, even as the Void moves on from Earth.

Appearing in "What If I, the Watcher, Killed Galactus?"Edit

Synopsis for "What If I, the Watcher, Killed Galactus?"Edit

Uatu the Watcher has killed Galactus before he could consume Earth. The other Watchers arrive and declare that he shall be punished. Mister Fantastic attempts to speak up in his defense, but the Watchers refuse, stating that with breaking the law of non-interference, there can be no defense. The Silver Surfer is inclined to kill Uatu, only to be stopped by the Watchers. The Fantastic Four, Uatu and the Surfer are taken to the realm of the Watchers. As unreasonable as the Watchers are, the FF choose to spring Uatu, who refuses to be free. He accepts a punishment -- to be the new Galactus!